The Crystal Slime was implemented in the 0.3.6 update that became available October 4th, 2016.

It can be found in an exclusive area in the Indigo Quarry, just above the pool where many Puddle Slimes hang out. The room has patches of Volcanic Ash Flowers, which glow red and emit sparks. The crystal pockets, not created by the Crystal Slime, will not damage the player if stepped upon.

Crystal Slimes are similar in design to the Rock Slimes but do three times more damage. They are an indigo color with blue crystals poking out the top. The crystals have a orange and white hue to them. They also make hot patches of crystals.

Patch of crystals up close. 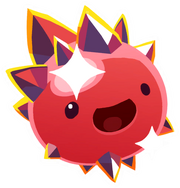 Crystal Slimes will not go out of their way to hurt the player but they will occasionally spin, which damages the player. And if the player is close enough, the crystal spikes will began to subtract health from the player.

Crystal patches made by the Slimes can be destroyed if the Rancher shoots water at them. This will shatter the crystals, and can be an effective way to get past all the patches sitting around in the volcanic cave.