Fire slimes are a rare breed of slime that lives on ash. Fire slimes will eat just about any food, but not without it being burned into ash first. The only way to feed a fire slime is to use an incinerator with an ash trough upgrade.  Fire slimes need ash to survive and will quickly snuff out if left on any other surface for too long. When keeping fire slimes in an ash trough, simply burn any food item to produce some ash and fill the trough. They only place they spawn is the Glass Desert during a firestorm. They will rarely fall from the fire twisters and, if your lucky, you can suck them up before they disappear.

A fire slime's naturally burning state makes them bad companions for other slimes as their fiery touch will send a slime flying. Additionally, fire slimes and their plorts need to be kept in an ash trough under an incinerator or they'll quickly snuff out. If you need to deal with fire slimes directly, a splash of fresh water will put out their fires for a short while. 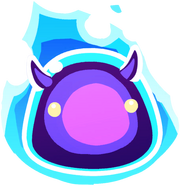 Fire plorts are used in the developing world on Earth to keep stoves and fireplaces burning. Thanks to fire plorts, warm hands and hot food is a possibility for millions of people who otherwise would not have access to such luxuries.  A rancher won't get rich selling fire plorts, and certainly managing them can be a dangerous endeavour, but they should know that the sale of each helps those in need. Now and far into the future, the little noble actions of every individual help us move forward as people. That much will never change.