The Gold Slime is the quickest and most daring slime of them all. This slime, with a rumored 1/10,000 (0.01%) chance of spawning anywhere, has the most valuable plorts in Slime Rancher. Players will need to be prepared for this slime because if it see the player, it will run into a wall and die, turning into golden paint. Getting plorts from this slime proves difficult, but it has infinite hunger, so get ready for a game of target practice!

Gold Slimes are fast and are capable of jumping and then jetting more than a hundred feet before vanishing into the sky when startled. If a player desires to obtain their plorts, one should keep a distance and aim carefully at the Gold Slime with resources. 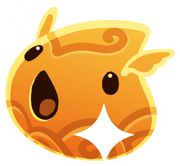 The gold slime secret style is Gilded, a gold slime with patterns on it and to mini wings on its head but can't fly.

These slimes can be RAGING fast when startled, finding them was hard enough, now GoLdBOb is running away sooooo fast that the world is like a snail race to him. I could BARELY feed him a Soupy Snack!