Hunter Slimes are a type of slime. It was added in the 0.3.5 update on August 2nd, 2016. Hunter Slimes resides in the Mossy Overgrowth. While rare and quite hard to spot due to its often invisibility, it's plorts are worth a fair amount to those who manage to capture it.

When a Hunter Slime spawns, it tends to quickly feed on other plorts. After growing to a largo, it becomes feral and will attack the player on sight. Feeding them a chicken calms them and yields a Hunter Plort, two in the case of feeding it a Roostro. Starving will make them become feral again, if previously fed. 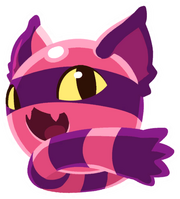 If you give them any plort, they will become aggressive and begin to attack and go towards the player, attacking it and biting her. Hunter Slime invisibility can make them difficult to spot, so setting shaders to low and specifically hunting for them at night can make it easier. They also make distinctive whoosh-like sounds when turning invisible. Due to their behavior in captivity, High Walls and Air Nets are recommended. Also, if you hit a Hunter Largo to much with Fire Slimes, it will actually turn feral! Crazy, right?