Lucky Slimes are strange a variant of Tabby Slimes that seem to have a fascination with shiny objects, particularly newbuck coins. A Lucky Slime gobbles up any coin it can find, giving it a distinct jingling sound as they move about. However, coins don't make for a balanced diet and a Lucky Slime will still greedily devour meat of any kind. In doing so, its body bursts into a shower of newbucks, having little room in its slimy tummy. This burst often sends the lucky slime flying into the air.

Upon detecting a rancher, the Lucky Slime will make a hasty retreat. No known rancher has ever been skillful, or perhaps lucky enough, to capture one of these slippery slimes." Excerpt from Lucky Slimes in Slime Rancher

The Lucky Slime, as stated above cannot be captured and will disappear in about 5-10 seconds after being discovered. They are as rare as a Golden Slime, possibly even more so.

Feeding them meat sends them in the air, giving you about 40-100 newbucks. Not a large amount but you can say you found one. 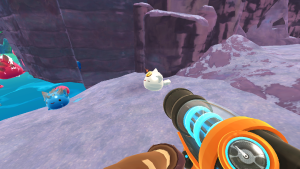 Where to find lucky slimes:

Lucky slimes can be found almost anywhere, but still, they have a low chance of spawning anywhere and anywhere on the Far, Far Range. So, don't expect your adventure for a lucky slime to be Fluffy and Fuzzy and easy. They're more likely to be found on accident. You might find one even though you're not looking for one. Another thing is that this Rich Kitten Blob makes a loud jingling sound that sounds familiar to a Christmas bell. So, if you're looking for THIS rich kitten blob around Christmas, don't get it confused with one of your tree bells on your Christmas tree.