The Puddle Slime is the shyest slime of them all. It is a fish-like slime, requiring water surrounding it to breathe. It is by far the most complicated slime to take care of, but it still is rather simple. Stick it in a pond and fill it up everyday so the water doesn't run out. Unlike other slimes, this slime cannot be fed but instead absorbs water. It will steadily produce plorts. 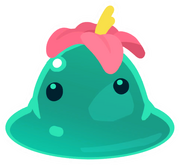 Puddle Slimes require being kept in a constructed pond or fresh water pool or else they will evaporate, despawning from the game. This makes it impossible to keep a puddle slime in a corral, as the corral walls are also not needed, the slimes not leaving a fresh water pocket once entered. The constructable ponds auto-refill gradually, and it is best to keep 4 puddle slimes in a single pond, as any more will lead to the slimes blushing, a unique phenomenon that renders them unable to produce plorts. The radius of the blushing is semi-large and unknown, four being the upper limit in a constructed pond, and the water pool in the docks able to hold 6-8. There may also be the risk of them climbing onto one-another when the ponds are overcrowded, leaving the top Puddle Slimes to evaporate.