The Rock Slime is a slime with rocky spikes extruding from its blue slime body. It is found mainly within the Dry Reef, the Indigo Quarry, and even sometimes the Glass Desert. Rock Slimes was the first slime to have a vegetable diet, before Rad Slimes came out. Crystal Slimes are very similar to Rock Slimes in appearance. 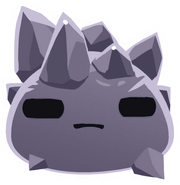 The secret style to the rock slime is Heavy Metal. It is a fully grey rock slime and it has shiny silver spikes.

Rock Slimes will roll about, which will damage the player on contact. As a result, it is recommended to have Air Net and Plort Collector upgrades with a Corral holding any Rock Slimes.

Rock Slimes, along with Pink Slimes, can be recognized as the main Slime of Slime Rancher.