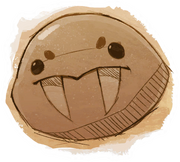 This is not the right image for the saber slime secret style, but the secret style is Pre-Jellasic, a tint of green in its brown color and its two fangs curved up.

Saber Slimes are carnivorous slimes introduced with Ogden's Wild Update. They are be found only in The Wilds, and will not be found anywhere else. Most saber slime largos found in The Wilds are feral, so be careful around them. Saber Slimes can make Saber Slime Mud Balls filled with 5 kookadoba fruits, also found only in The Wilds. But to find a "fresh saber slime" you have to get a mod. Like the Tabby Slime's behaver, it will pick up random fruits or veggies if not feral.

This article is a stub. You can help Slime Rancher Wiki by expanding it.

The Saber Slime is a slime.

Though believed to be long extinct, the saber slime lives on through the largo slimes in The Wilds. Saber slimes were believed to be one of the fiercest predators during the Jellassic Period of the Far, Far Range, a time when gigantic slimes roamed the planet.

Though saber slimes are carnivores, the largos in The Wilds display a curious habit of bundling the rare kookadoba fruit into bundles of sticks, mud and slime that become rock-hard in time. Only Ogden's specially engineered kookacrackers are capable of breaking them.

Most saber slime largos found in The Wilds are feral, looking to take a bite out of whatever they see. They're also incredibly agile for slimes, capable of powerful jumps that allow them to bound off other surfaces before targetting their prey.

If you encounter a horde of feral saber slime largos, watch your back so you don't get flanked!

Saber plorts are collected for their historical

value, offering a window in the primitive past of The Far, Far Range. Some slime scientists have tried to extract the slime DNA from these plorts in order to recreate a true saber slime, but all have failed. And honestly, that's probably for the better, because as soon as that happens some charming billionaire would be talking about making a whole theme park to view them in captivity and then...