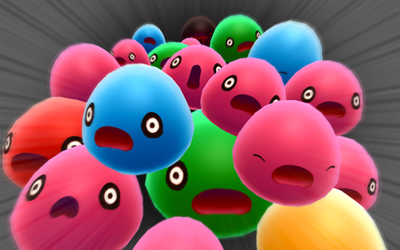 Slimes are the little gelatinous alien balls that live in the Far, Far Range. There are several different species, and each has unique traits used to identify them. They do not despawn and respawn in certain areas. They can either be categorized by their diet, general behavior towards the rancher, or their location. You will find a short summary of each slime on this site. Visit the main articles linked for a more in-depth description with gameplay tips. To see more info about the plorts of slimes, click here.

These guys are called slimes. Each one is different in its own way like, Phosphor Slimes can slightly fly or glide, honey slimes have tasty plorts that attract slimes faster than any other plort would, the rock slime can produce damage if you get too close, the boom slime explodes, the rad slime has a radiation aura surrounding it and if you go in, you get damage, dervish slime can make big tornadoes, Tangle slime can push vines out of the ground and try to get any plorts or food with the vines, the mosaic slime can attract slimes and also can set anything on FIRE, quantum slime can make 'ghost' versions of itself and teleport to that clone, puddle slimes are known to be shy, tabby slimes are the cutest, hunter slimes can be almost entirely invisible, Chrystal slimes push crystals out of the ground and if you step on them, you deal damage, The fire slime is REALLY on FIRE, the lucky slime shoots in the air and rains coins, and last but not least, the pink slime is the first cutie you see and the most seen in the whole game it is entirely impossible to go to a single place without a single pink slime.

The Meteor Slime was originally going to be added in the 0.6.0 update. It would’ve rained down from the sky in a ball of fire, and was sort of like an “inverse Boom Slime”. However, they thought it wouldn’t make much sense, so they scrapped it and replaced it with either the Dervish Slime or the Fire Slime. In an interview with Nick Popcovitch on rockpapershotgun, you can see some failed Meteor Slime designs. One is purple with a bright yellow star on it, one was just a rock, and the last one was a brown Slime with rock around its face (that design is my favorite). The Meteor Slime may return in a future update.

The Leepsung Slime has not even been mentioned. But in the code there is a diet for a “Leepsung Slime”. It remains a mystery.

On Chris Lum’s Twitter profile picture, there is a slime design that has a lot of bright, bulging red eyes, and what looks like ears or fangs. It is unknown if this Slime will make an appearance in-game.

The Quicksilver Slime was added in the 1.2.0 Mochi’s Megabucks Update. A load is currently known about this Slime. People are uploading Quicksilver Slime pictures at a slow rate. Also, there was an alpha model test for the Slime in the 1.1.0 gamefiles. It wasn’t a lot though. It was just a Fire Slime that does not produce fire but produces grey plorts with shocks in it and moves very fast.

The Tarr, Largo Slimes, Feral Slimes and Gordo Slimes are considered "Special Slimes". The reason behind that is because they aren't really like your normal slimes like the Pink slime and Tabby Slime. The only things they all have in common is they are based on food, like the Tarr would eat everything in its path except veggies, fruit, backdrop decor, and water, Largo slime have bigger appetites, Feral slimes are mean until fed, and gordo slimes need to be fed a certain amount to food to burst loot and it's slimes. Another thing that they all have in common is that none of them can go in your vac pack unless you use certain mods that will allow you to suck up gordo slimes, tarrs, largos, and feral slimes.