The Tabby Slime is a common slime found throughout the Far Far Range, and offers more favorable behavior than the Rock Slime. The Tabby Slime also seems to be a fan favorite, along with the Phosphor and Honey Slime. It can be found in the Dry Reef and the Moss Blanket. This slime also tends to pick up any fruit or veggie in its mouth and make a cute meow. But soon it will let go. 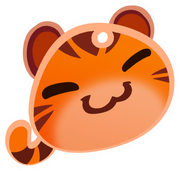 Tabby Slimes are the highest jumping slimes in the game, so players should use the High Walls Corral upgrade when containing them.